The Claim to Check

#MerylStreep made fun of mentally challenged on late night tv here's proof her entire speech was a fraud pic.twitter.com/vhjhEJPPsH

Using a few key evaluative questions, we can check a claim, tweeted in early January 2017, that Meryl Streep made fun of mentally challenged people. See the animated gif tweeted at left.

What is it? An animated gif that appears to be actress Meryl Streep, shared on Twitter with the caption: "#MerylStreep made fun of mentally challenged on late night tv here's proof her entire speech was a fraud."

What/Who is the source? In this case, the image was tweeted by Kayla Vas. Twitter account information indicates Kayla is a radio personality and provides a website link to Kayla's homepage. 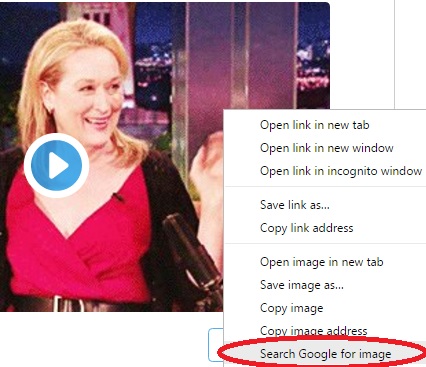 Who created it and where is it from originally?  It is possible to investigate the origins of images in Google. Right mouse-click an image and select "Search Google for image." In this case, a reverse image search locates websites that spread this claim and some that refute this claim.

What is the purpose?  Why was it in the news?  Search reputable news sources like those found on the Hewes Library resources list or websites of reputable news organizations (like The New York Times) for keywords surrounding this claim. In this example, Meryl Streep sparked controversy for her acceptance speech at the 2017 Golden Globe Awards (video and transcript). She spoke about her disappointment in Donald Trump's imitation of a disabled reporter, and this animated gif seems to accuse her of the same thing.

Can the claims be verified in other sources?  Other savvy investigators discovered that this animated gif was created from an interview in 2009 with Conan O'Brien. Streep is describing her fear of a lion while filming "Out of Africa" during minute six of the video. By watching the video it is clear that her gesture was taken out of context.

Verdict? This animated gif was taken out of context and distributed with fabricated information to appeal to our emotion. The person tweeting the information did not have a clear purpose other than to distribute misinformation; in other words: they are not a reliable source. The claim is fake.